On the 3rd of December 1795 the Scottish explorer Mungo Park left the town of Pisania in the Gambia with a few African attendants to begin his journey to locate the River Niger. He had traveled but a few miles on his donkey, when a number of local people came running up and stopped his entourage. They told him that he had to either accompany them to pay respects to the king of the region at the town of Peckaba, or make an immediate payment to them instead for customs tax. Park remonstrated with them, arguing that he was not in the country on business like some of the merchants who came from other regions, but was traveling out of curiosity and a desire for knowledge about the area. They would not buy it, and insisted that he make “a present to the king,” or he would not be allowed to continue. Seeing that they were more numerous than his attendants, Park gave them four bars of tobacco “for the king’s use,” and they let him go.

Now every Nigerian, and possibly, every African, will recognize that what happened to Park was a pre-colonial form of what is known as “egunje” (eh-goon-jeh) in Yoruba/ Pidgin. Egunje is an involuntary gift demanded from people by officials in positions of power . In Nigerian Pidgin today, it is also the word for corruption.

What happened to Park was not just a one-time thing. When he left the Bondu region and entered the kingdom of Kajaaga, a group of about 20 armed horsemen allegedly sent by Batcheri the king caught up with him at the town of Joag. He was surrounded and told that all his property and servants were forfeit because he had failed to pay customs when crossing into Kajaaga territory.  Park apologized to the armed men for not paying the customs and giving the king a gift when he crossed the border, and offered to pay the duties right away. He gave them five drams of gold to that effect. Of course the armed horsemen were not satisfied with that sum. They insisted on searching Park’s belongings, and removed everything that took their fancy from his bags. After much arguing and wrangling, they left, taking half of what Park originally had.

But this was not the end of Park’s egunje-related troubles. While he was still in Joag, Demba Sego, nephew of the king of neighboring Kasson, visited Kajaaga on a peace seeking mission for his uncle. Hearing that there was a white man in town, he came to see him. Park complained that Batcheri’s officials had ransacked his bags and robbed him of most of his valuables. Demba seemed sympathetic. He was traveling with a large retinue of men and he offered Park protection on the journey to Kasson.  Park believed he had found a genuine benefactor. He was wrong.

When they got to Kasson and Park was lodged in the house of Tiggity Sego, Demba’s father, Demba came by and told him he expected compensation for all he had done for him. But that was not all; Demba’s father too demanded gifts because he was a chief in the kingdom of Kasson.

This was typical of Park’s experience in nearly every community he entered on his way to the River Niger. The final humiliation was when he was kidnapped by Ali, a “Moor” chieftain, and confined for four months. Ali confiscated what was left of Park’s property, so that when Park escaped from his clutches, it was only with his horse, a compass, and the ragged clothes he was wearing.

Many educated Africans on the African Web forums I visit prefer to believe that egunje did not exist before colonialism, and that European colonialists taught Africans to be corrupt. It is an odd argument, but some will argue it to the death.  Our precolonial societies, these people affirm, had fail-safe mechanisms in place to ensure that everyone followed the straight and narrow. They never tell you what these infallible mechanisms are. In some ways, this is not a surprise: human communities and peoples like to imagine themselves to be innocent, and it is always those Others, those pernicious outsiders who introduce evil. The record suggests that this attitude is ancient: that’s why the ancient Romans believed that the moral decadence of the Empire was brought to their virtuous society by the Greeks whom they conquered; today, some Americans blame Mexicans for the murder and crime in their country.

It never works to tell these Africans that the pre-colonial written record shows corrupt and other practices. The counter argument is always that the record is biased or false because it was almost all written by Europeans. Of course, there are accounts written by pre-colonial Africans themselves that say many unflattering things about pre-colonial Africa (though not necessarily about corruption), such as the writings of the first African Bishop of the Niger, Samuel Ajayi Crowther, and the Igbo missionary Reverend John Christopher Taylor. But according to many modern educated Africans on the Web, Crowther and Taylor are “colo-mental” Africans (a Nigerian English abbreviation of “colonial mentality”), the epithet they spit at anyone seen as a collaborationist Uncle Tom.

But it isn’t just Africans who have such a view of African innocence and European wickedness. Some Western scholars of a particular liberal stripe provide support for the arguments of these educated Africans. For such scholars, European imperialism or imperialistic intent makes them automatically guilty. For example, in the introduction to one of the versions of Mungo Park’s Travels, the editor, English professor Kate Ferguson Marsters, appears to mock Park for being irritated by the relentless efforts of African chiefs and officers to relieve him of his valuables. She calls the demands for gifts “a method of taxing traders as they crossed the frontiers of various kingdoms.” She claims for the Africans that they “recognized [Park] from the beginning as being there on business, and they taxed him accordingly.” She suggests that they somehow knew that the search for the river “was only a preliminary step to trading.”

Calling the demands a “tax” creates the impression in the modern mind that it was a set and accepted sum that was graduated “accordingly” by some known method, collected for a state or kingdom’s treasury, and spent to benefit citizens or inhabitants. Of course it was nothing of the sort. It was just as capricious and undefined then as it is today when you are stopped by policemen at a checkpoint in Nigeria, and asked, “Oga [boss] you fit give something to the boys?” This arbitrary tax—and indeed, corruption is an illegal tax on citizens, on business and on visitors—is not for the policemen’s improvement fund, or for the policemen’s charity for destitute children, or for the state treasury. It is for the individual policeman’s pocket, and it is clearly a shakedown.  It can even be seen as a form of armed robbery because the assault rifle-armed police can take you away and lock you up until you “give something to the boys.” 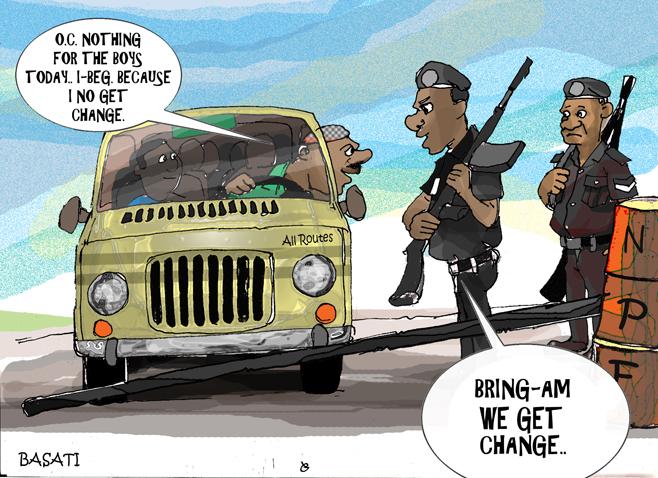 As in many African countries today where there are also standard customs duties, there was what Park called a “common tribute” in the kingdom of Bondu, one of the first regions he passed through when he left Pisania. For example, the typical tax on goods is “one Indian baft, or a musket, and six bottles of gunpowder.” But what Park found deeply annoying was not this legitimate tax, but the effort by minor and major officials to get as much extra from him as they could.

Nearly all the explorers who scouted West Africa before colonialism had to put up with this extortionist behavior. The Lander brothers who came after Park suffered as well. When the brothers Richard and John arrived at the coast in Badagry in their quest to complete Park’s exploration from Bussa (where it had been fatally aborted), the first potentate they met with was Oba Adele or King Adele (spelled Adooley in their journal) of Badagry.

One of the first things they report is that Adele’s chiefs tried to persuade the king to demand from the brothers “a sum of money, which, they are aware, it is not in our power to pay…”

While Adele did not immediately comply with the demands of his chiefs, he promised to visit the Landers later to examine their luggage to ensure they did not have anything “objectionable” in the boxes. Before Adele’s visit, some of his chiefs sent a messenger to the Landers demanding the sum of one hundred and twenty dollars to be divided among them. The brothers felt compelled to give the money.

Adele himself soon came by to pay them a visit, and requested that they bring out all their boxes for inspection. The king went through the luggage, carefully examining every item they had, and if anything took his fancy, he just handed it over to his attendants to put aside for him—cloth, pipes, snuff-boxes, knives, paper, ink, penny-whistles, a great haul that he took away with him when he left. He even took books the Landers had brought to read.

Despite this huge collection of “gifts,” Adele would not let the brothers leave until they had written down a list of things he wanted the British fort at Cape Coast to send to him. Included in the list were four regimental coats of the sort worn by the King of England: these were for Adele himself, and he also wanted forty lesser coats for his war chiefs. On the list were two brass swivel guns, fifty muskets, twenty barrels of gunpowder, four swords and forty cutlasses, “two puncheons of rum, a carpenter’s chest of tools, with oils, paints, and brushes,” and a rocket gun with six rockets and a soldier from Cape Coast to fire it. Finally, he asked for two casks of cowries, the form of money used in the West Africa region.

When the brothers somewhat sarcastically asked if he was sure he would be satisfied with all that, Adele thought about it for a minute, said no, and then added a large umbrella, four casks of grapeshot, and a barrel of flints. All of this was written in a letter, sealed and sent to the British garrison at Cape Coast. The record does not say whether they complied.

There are other examples too numerous to detail: in another egregious one, the British government-sponsored explorer Henry Barth was detained by Bello, the Emir of Katsina for ten days in 1851 because Barth was unable to provide him with the large enough “gift” that he felt he deserved. The emir demanded 100,000 cowries, which Barth did not have, and hinted to the explorer that he could detain him in Katsina indefinitely if he did not deliver the sum. Eventually he had to let Barth go because he recognized he could not keep him there forever. Barth was also able to persuade him to accept lesser items as gifts. 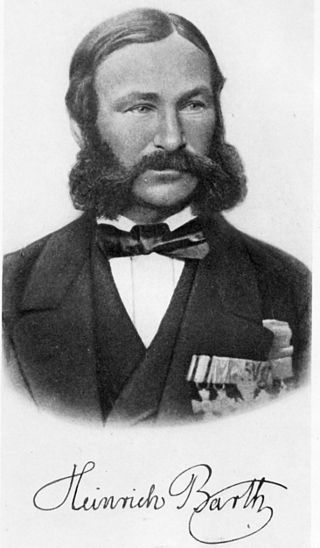 While the officials, chiefs and kings these explorers met were avaricious in the extreme, it would be a mistake to see all or most of the people in these West African societies as similarly greedy. Many of the ordinary Africans the explorers met were kind and generous, and gave help and sustenance without expecting anything in return. Whether it be the slave woman who gave Mungo Park handfuls of peanuts when he was hungry and had no money to buy food, or the woman who gave him shelter and food when no one else would, there were lots of ordinary Africans who gave help without expecting anything in return. The problem then as now was often the elite Africans, and those in positions of petty power.

Travels in the Interior Districts of Africa by Mungo Park

Journal of an Expedition to Explore the Course and Termination of the Niger, vol 1, by Richard Lander

Travels and Discoveries in North and Central Africa, vol 1, by Henry Barth